The Holland Baptist Society was registered with Erie County on May 19, 1828. The first entry in the church record book was November 29,1829, when a committee wrote the church’s articles of faith and covenant. They were adopted by the original 21 members on December 8, 1829, as well as the church’s original, Holland Baptist Conference. Services were held in schoolhouses and private homes. Preachers were traveling pastors or pastors from neighboring communities.

Construction of the church building was begun in the spring of 1842 and dedicated to the worship of God in March of 1843. The building was shared with other denominations who were instrumental in financing and the construction. There were a number of pastors over the next several decades. Between 1906 and 1913 there were major improvements to the sanctuary, including the stamped metal ceiling that remains to this day. In 1928 the first organ was purchased. In 1949 the original parsonage on Pearl Street was sold for $2,550 and the present one was purchased for $4,150.

In recent decades, improvements to the church facilities have included the conversion of basement space into classrooms, electrical and audio/visual equipment upgrades, and remodeling of the fellowship hall for increased mixed use. Many portions of the parsonage have also been extensively remodeled. There is much more history in the church records and many stories of faith, salvation and God’s grace that are written only in people’s hearts and in Heaven. 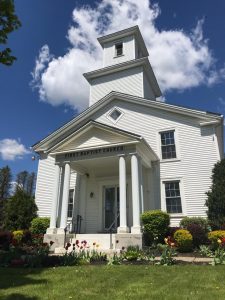 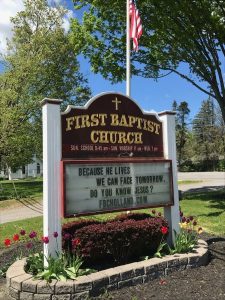